Bengaluru, the city of gardens in Indiaplayed host to Celebrity Chef Shailendra Kekade who took on the daunting task to choose Bengaluru’s Hyper Budding Chef.30 lucky chefs were shortlisted by HyperCITY through online registration on its facebook page and offline at the Embassy Paragon store. These chefs were asked to bring-in pre-cooked dishes on the finale day, which were tasted and evaluated by Chef Shailendra Kekade. The dishes were judged based on originality, innovation, taste and presentation. 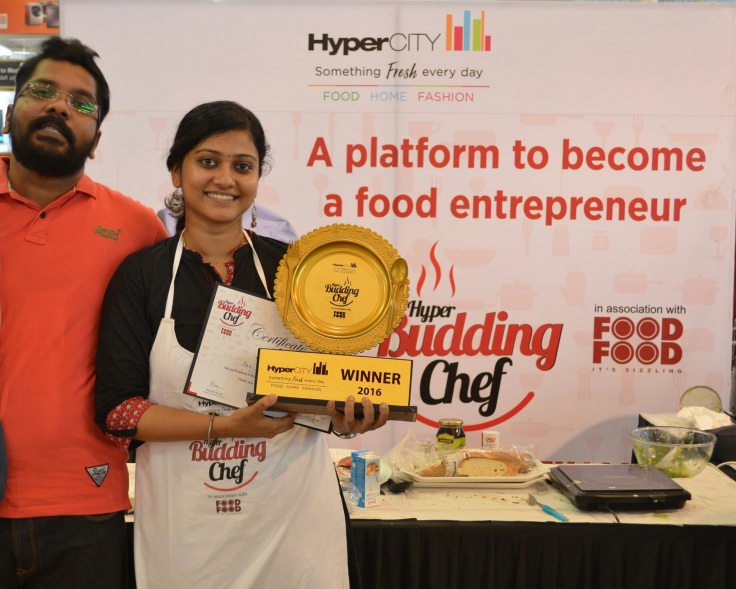 Chef-Shailendra Kekade, host of the show “STYLE CHEF” on FOODFOOD Channel did not only judge the finale but was also be seen revealing his secrets of plating at HyperCITY. He engaged with the audience by sharing his lesser known techniques and exotic ingredients, in the most extraordinary yet simplified manner. He was also spotted using ingredients and homeware available at HyperCITY and took plating and presentation of food to a whole new level.

Commenting on the occasion Mr. Manoj Jain, VP- Marketing, Visual Merchandising & Loyalty at HyperCITY Retail (India) says, “We have always celebrated culinary prowess with our wide variety of world class food products, condiments and spices, many of which are exclusively available at HyperCITY. The Hyper Budding Chef Contest gives our very generous patrons an opportunity to explore their hidden talents and share their secret recipes with everyone. Most importantly, Hyper Budding Chef Contest is an opportunity that we would like to give our Home Chefs who are not only passionate but entrepreneurs in their own way, to sell their own cooked food at our stores absolutely free of cost.”

Celebrity Chef ShailendraKekadesaid,“I strongly believe that India is a land of food and there is a lot ofexcellent young chefs who are looking for such platforms to showcase their talent. Hyper Budding Chef is a great opportunity for everyone who is eager to learn, grow, and advance their careers, as well as cook on a national stage.’ He further added, ‘This competition is a celebration of aspiring, talented chefs in the country. It doesn’t matter if you’re a self-taught line cook, a culinary school graduate, a second-career cook or merely a food enthusiast; it’s for everyone. Let the best food win!”

The first winner in each city will get the following,

1.    A chance to become a Food Entrepreneur at HyperCITY store. The winner will be eligible to set up his/her food stall at HyperCITY store and will be able sell his/her own food, without any additional charges

2.    A Chance to become a star on FoodFood channel,