‘At the Thresholds of life and death’ 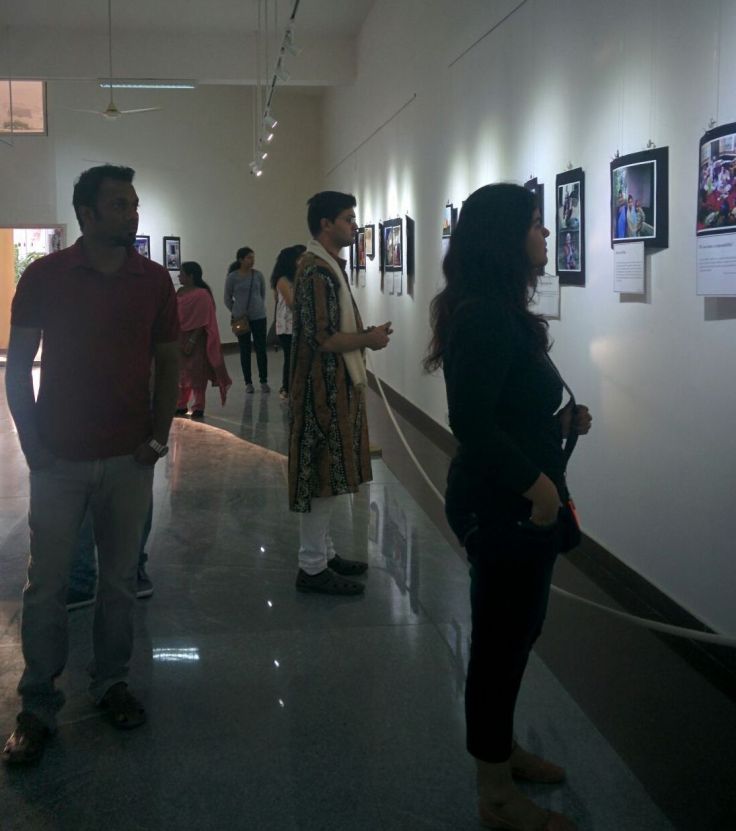 Bengaluru, 28 February 2016: The two day photo exhibition titled ‘At the Thresholds of life and death’ by the Health and Nutrition specialization students at the Azim Premji University was held at the Chaya Gallery, Rangoli Metro Art Centre on  February 27-28, 2016. The exhibition attracted a stream of visitors from all walks of life including students and fellows from public health institutions, academia, women activists and the lay public interested in women’s lives.  450-500 people visited the exhibition during these two days.

The exhibition was inaugurated by Laxmi Murthy, Consulting Editor, Himal South Asia and head of the HRI Institute for South Asian Research and Exchange.

Lauding the efforts of the students, she spoke how the exhibition portrays the different aspects of women’s lives depicting as much the everyday struggles of women as their powerful stories of hope and survival. “What is remarkable about the exhibition is the mindfulness and humility with which these photographs have been taken, arranged and captioned to convey multiple narratives”, said Laxmi Murthy. She also found the juxtaposition of the text and photograph an interesting technique to resist linearity or even predictability of the reality of life.

Drawing on seven different states in East and Central India, the stories of women depicted in this exhibition travel from the Garos in Assam, Sahariyas in Madhya Pradesh, Kandhas in Odisha, Bengali Muslims in West Bengal, Oraons in Chhattisgarh, the self-help groups in rural Bihar and those living in the slums in Bhopal, Madhya Pradesh. The real life stories of women reflect on the provision of care in Government and private health centres, and domestic spaces, the journeys between these spaces and their outcomes. The stories and experiences of women witness a range of events that move from the mundane (the everyday life of pregnant woman) to the extraordinary (the death of a child/mother) as well as varied experiences including accessing formal and informal spaces of care (state provisioning through ante-natal care, institutional delivery, healing hands of a mid-wife, help from the family) or even ruptures in such care (severe anemia, malnutrition, near miss or maternal death). These stories are co-written by those who the women encounter in this journey of motherhood that is, the ASHAs, Sahiyas, Ojhas, Dais, family members, multi-purpose Village Health Workers, Auxiliary Nurse Midwives and doctors.

While maternal health is a visible priority for the Government of India reflected in its commitment to achieve the Millennium Development Goals, in particular MDG5, and recently Sustainable Development Goals, stories of several women living at the margins of society, disadvantaged by virtue of their castes, classes and genders get silenced. The exhibition is a modest effort by the Health and Nutrition specialization students at the Azim Premji University to capture the voices of women from these marginalized communities and render them audible. They have several stories to share that lie at the thresholds of life and death.

The response to the exhibition by those visited has been overwhelming. “A compelling presentation, something that attracts more youth to support the cause of maternal and child health. It is an eye opener to see different shades of lives that have stories of hope, survival and inspiration as well as that of despair and marginality” said Reethu John, a HR professional in the city.

The students who put up this photo exhibition are Aswhini, Damini, Ganga, Preeti, Rajnit, Ratneshwar, Saumil, Vrinda and Tutul. They are in their second year of M.A. Development and are part of the Health and Nutrition specialization within this program. Arima Mishra and Sreeparna Chattopadhyay, faculty at the University mentored these students throughout the entire journey of the exhibition.