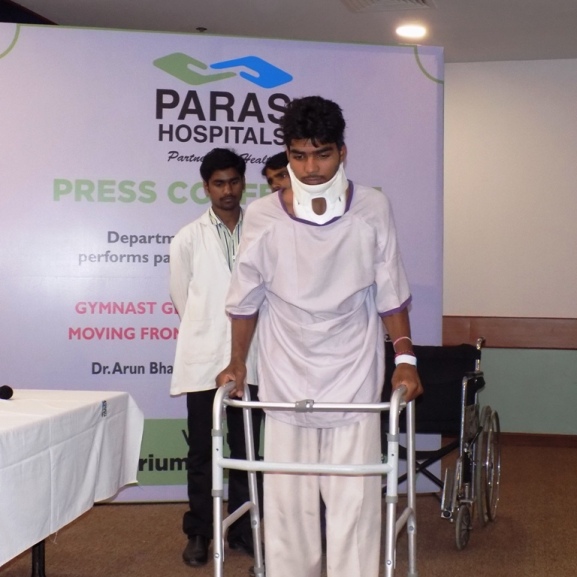 Gurgaon, 31 March 2015: Sachin, a young and promising national level gymnast from Haryana suffered an unfortunate fall while performing a complex gymnastics maneuver during a practice session and broke his neck bone, leaving him paralyzed immediately.

Even as his coach rushed him to a nearby hospital, he feared the worst since he had come across a few such cases of athletes who had failed to recover from such an injury inducing accident. The doctors who examined him confirmed that he had sustained a serious cervical spine injury with quadriplegia (paralysis of arms and legs). Realizing that it was a very serious injury and needed high expertise to handle carefully, they referred the athlete to the Spine Department of Paras Hospital, Gurgaon for further management.

As soon as he arrived at Paras Hospitals, Gurgaon, the spine team led by Dr Arun Bhanot, chief of spine services, started appropriate medical treatment. Since the right treatment began within a few hours of injury, it proved crucial to the final outcome. Then they decided that undertaking a complex set of surgeries on his neck was the only option to provide Sachin a realistic chance of survival and recovery from paralysis.

“After initially stabilizing his condition with medicines, we assessed it to be a dislocation of C4-5 vertebra in the neck causing damage to the spinal cord that led to the paralysis. We decided to immediately conduct a surgery as we did not want to lose any more time. Sachin was operated the very next morning and underwent two spine surgeries at the same time — one from the front of neck and second from the back of neck. After the spine surgeries, Sachin showed a remarkable improvement within the next 24 hours, and has continued to improve ever since. All his four limbs have started moving,” said Dr Bhanot.

Within 3 days of the operation, Sachin regained enough strength in his legs, so much that the doctors were able to make him stand by his own. With both age and will power on his side and accurate medical help, Sachin managed to achieve a fete that surprised even his doctors.

A spine or brain injury is one of the most critical injuries suffered by the body since it impacts the entire central nervous system. Unlike an injured hand whose impact would be limited to just itself, an injured spine has implications for the entire body. It may leave a person paralyzed for life.

“Sachin is extremely lucky to have such a fast recovery from a very serious spinal injury that caused paralysis. The incidence of recovery in such injuries is abysmally low even at the best of centers in the world. In this case, it was a combination of multiple factors that went in Sachin’s favor; the foremost being his coach’s insight to take him to a nearby well equipped medical center whose doctors in turn referred him to a tertiary care spine unit that was well geared up to provide him a world class treatment. Getting a prompt medical treatment within a couple of hours of his injury, followed by correct set of surgeries under expert hands within the first 24 hours of injury provided stability to his unstable spine. This made the whole difference between him remaining paralytic for his whole life or recovering and being able to walk by himself,” added Dr Bhanot.

The doctors at Paras Hospital are quite satisfied with Sachin’s overall recovery and are hopeful that he will recover completely from such a grave injury in the next few days.

The episode also highlights the untold story of several athletes in India who have suffered a life-jolting spine injury, and failed to recover because of factors such as lack of adequate medical facilities, delay in referrals, and paucity of high quality spine surgeons.